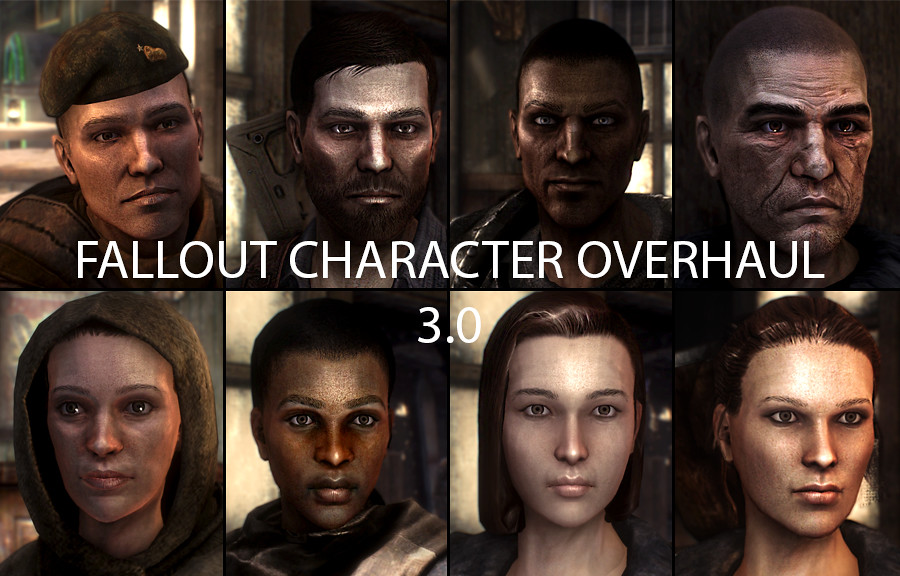 - Different races have their own unique headmeshes adding more diversity to the facial shape of characters.

- All races have their own high-resolution texture maps with unique properly sculpted normal maps. This can make huge changes to what a face looks like as it gives it the illusion of being a higher polycount than it actually is adding lots more depth to faces.

- Ghoul’s have also been re-imagined. You will find a variety of different looking Ghouls including Half-Ghouls.

- Raiders/fiends have also been remade with a different style that affects both male and females.

- Nearly all NPC faces have been remade and adapted to the new meshes as well as being distributed among multiple different age groups. This adds much more variety to the game. These different age groups have also been added as playable races along with some additional alternate races for some age groups to make people in fallout even more diverse.

- FCO works great with any ENB. Because FCO adds new normal maps that improve the way faces react to lighting and ENB improves lighting in Fallout they are a great match.

- New high-quality eye textures have been made and are useable via the race menu. There is also a greater variety of eye colours available along with the opportunity to have mismatching eyes!

- Hair textures have been remade and are now more high resolution, this includes beards and brows.

- When you start the game you get a choice of different brow styles! If you change your mind on the style you chose hold right ctrl + shift for a few seconds and the menu will popup again.

- Animated eyelashes have been added to all female races.

- Important NPC's have been given custom face textures to make them more unique. To name a few, the Courier found in Primm has a bullet scar wound, Legate Lanius has scars covering his face and Ranger Andy does too from his injury.

- Unique player only races are available.

- Optional animated sweat effect plays on characters who are outside for a while.

- All of these things come with little to no hit to performance, headmeshes are the same polycount as vanilla and the only texture that is bigger than vanilla is my diffuse.